This article was reposted from the July/August 2021 issue of Trial News, the monthly newspaper of the Washington State Association for Justice.

Law school teaches us to be tacticians. To think like a lawyer means to identify the relevant facts and apply the law to those facts in a way that supports our client’s interest. A skilled advocate can argue either side of a case. The personal values and emotions of the individual lawyer are irrelevant. Or so we are told. This is the zealous lawyer’s code. Yet after presenting a logical, rational, and compelling case, good lawyers still lose. Why? Rick Friedman knows why. 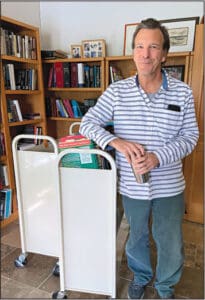 Now 41 years into a remarkable career as a trial lawyer and author, Rick Friedman answers this question in his latest book The Way of the Trial Lawyer: Beyond Technique. His new book speaks to the seasoned lawyer who is ready to put down the skills manual and take up the important conversation of moral advocacy. Friedman’s uncanny gifts—to see farther and look deeper into the heart and meaning of our work as trial lawyers—are on full display.

Friedman did not need to write another book to establish himself as master teacher in the art of advocacy. He is a prolific writer whose books include bestsellers Rules of the Road: A Plaintiff Lawyer’s Guide to Proving Liability, and Polarizing the Case: Exposing and Defeating the Malingering Myth. All the books are among the most influential ever written on trial advocacy.

I sat down with Friedman in his Bremerton office to discuss his new book. Our meandering conversation covered everything from moral advocacy, therapy, and overcoming fear, to finding meaning in the practice of law.

From a large desk stacked with papers, Rick Friedman can see the water.

The ferry winds its way to downtown Seattle just beyond the inlet outside his small office building. Shelves filled with books, family photos, and art line the walls. He has been recording an audiobook and a large microphone sits on a nearby table. A cart in the middle of the room contains thick reference materials on toxicology and chemistry. He will soon begin the first of 23 trials against Monsanto, whose chemical products have poisoned America’s schoolchildren throughout the country.

Rick Friedman was a bookish kid. He absorbed himself in words. Books served as “owner’s manuals” guiding him to build a life of purpose and integrity. He expected to become an author. Attending law school was a detour. It is no wonder that he has spent much of his legal career generously writing and sharing what he has learned in guidebooks for other trial lawyers.

We lose when we ignore the moral force of our cases, says Friedman. Civil advocacy is not morally neutral. “We are feeling creatures,” he says. “It is feelings and emotions that give meaning to our lives. It is feelings and emotions that allow us to connect with others.” Is it any wonder then, that who we choose to represent and what we choose to do with our skills has an impact on whether we win or lose? Isn’t there a difference between representing a company that has marketed a defective product and representing the widow and the orphan of a man killed by that product? “A morally conflicted lawyer is an ineffective advocate,” Friedman continues. “But a lawyer who leads with the heart will have a power most lawyers never have.”

The key is moral energy, Friedman continues. “The first step in developing moral steadiness is allowing yourself to feel the power of moral energy in the courtroom.” But, what is moral energy and how can we tap into it, I wanted to know. Moral energy is like an “electrical charge” that exists inside the facts of every case. It just feels wrong. “A charge of moral energy can serve to attract or repel. It can help connect us to jurors, judges, or witnesses; or it can separate us from them.”

I thought of a recent trial where the owner of a car dealership ridiculed our client’s cancer and then fired him while he was on medical leave. It just felt wrong because it was wrong. Many people consider it morally reprehensible to attack the sick or weak in our community. It was no surprise when the jurors sent a strong moral message with their verdict.

And it just feels wrong when a paid courtroom doctor claims our client is faking her injuries to recover in a lawsuit after her husband, treating physician, and best friend all testified about her struggle to recover. Many people consider it disgraceful to falsely accuse someone of lying. It is much easier to use the moral energy of revulsion to unite the jurors and your client in defeating the uncaring boss or the accusatory courtroom doctor.

But moral energy goes both ways. Moral energy is also present when we consider the uncomfortable parts of our cases, Friedman warns. Many of us do not like to think too much about our “bad facts.” But how can we walk the jury through the emotional minefields of the case if we “have not walked through those minefields ourselves?” Without spending time with these uncomfortable issues, he says, “you are susceptible to being knocked off balance at trial.” 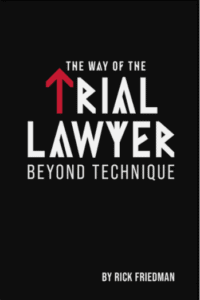 Then we started to talk about rocks. You can think of your case as a “bucket of rocks,” Friedman began. Each rock is a fact in your case. “It’s up to you to decide which rocks you pull out and how you arrange those facts to tell your story.” For instance, you can see a man who is undeserving because he has held over 15 jobs, never able to hold down any job for more than a few months. Or you can see a man given little opportunity in life but who “never gives up” because whenever life knocks him down, he gets back up again and keeps trying. How can jurors not like a person like this? Same facts. Different story. Different moral energy.

Lawyers are naturally obsessed with facts. But overfocus on facts can be dangerous. Moral energy depends on the facts, Friedman acknowledges. But the important moral energy is greater than the facts because it lives beyond the facts. “Too often, we are so focused on the facts that the moral energy in our case gets lost,” he warns.

I thought of every case I ever had in the first 15 years of my practice. I would obsessively catalog every fact, get lost in the details, and forget that most cases turn on only a few facts. And those important facts, Friedman reminds us, are the ones that generate the moral energy of the case.

Why does a defense attorney who can harness hundreds of facts, show countless PowerPoint slides, and deliver an exhaustive hour-long closing argument still lose her case? Yet I can give a shorter closing, with far less detail, and still win? The answer is moral energy: I am arguing that everyone should be given an equal chance to succeed. Who doesn’t want to support fair treatment?

It’s not that facts are unimportant, Friedman continues. “The moral energy comes from the facts, of course, but we need to organize the facts in a way to highlight the moral energy.” As Friedman observes in his book, “Facts don’t persuade, moral energy does.”

Rick Friedman hopes readers of his new book, The Way of the Trial Lawyer: Beyond Technique, will understand that, by opening to the moral energy in each case, we can become better advocates and better people. The practice of law is more than a business. Law school professors be damned: morality has everything to do with the practice of law.

When we act as amoral zealous technicians, Friedman warns, we are “abandoning our role as moral agents.” But when we turn inward to find strength and sort through the moral complexities of our cases to find the part we believe “down to our bones,” we are firmly rooted in fighting for something bigger than ourselves. And that, says Friedman, is The Way of the Trial Lawyer.