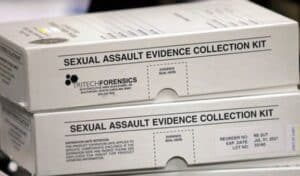 For more than a decade, a Friedman | Rubin client was forced to look over her shoulder, terrified that the stranger who dragged her off a downtown street and raped her in March 2007 would make good on his threat to kill her for reporting her sexual assault to Seattle police. It was not until October 6, 2020 that the rapist, Jonnie Lay, now 51, was found guilty of rape in King County Superior Court. This conviction, more than 13 years after the crime, should have come much sooner. Lay, a sex offender with a criminal history dating back to 1990, wasn’t in court to hear the verdict. Released from jail in April because of the COVID pandemic, Lay attended his trial but was then free for more than a month before he was arrested Nov. 23 on a $500,000 bench warrant, after he was found living in a tent near Woodland Park Zoo, according to court records and the victim’s attorney, Julie Kays of Friedman | Rubin. Lay is to be sentenced Feb. 5, with the state recommending he serve just over 11 years in prison, the high end of the standard sentencing range.

In a lawsuit filed earlier this month against the state and city, Kays alleges the Washington Department of Corrections (DOC) failed to properly supervise Lay in the years before the 2007 rape, thereby providing him the opportunity to rape her client when he should’ve been in jail. The suit also alleges the Seattle Police Department (SPD) failed to pursue investigative leads — including DNA evidence — that could have resulted in Lay’s arrest years before he was charged with rape in 2018 and extradited from Illinois. Instead, the lead detective originally assigned the case deactivated the investigation within weeks of the initial report without even interviewing the victim, according to the suit. According to Kays, the client “feels such a sense of betrayal from the Seattle Police Department for not testing her rape kit back in the day. It’s an institutional betrayal,” said Kays. “She doesn’t want another woman or man to go through what she’s had to go through, waiting for more than a decade for justice.” Citing DOC records that say Lay’s adherence to the requirements of his community supervision were “abysmal,” the lawsuit alleges DOC’s negligence resulted in Lay treating supervision as a joke as he continued to rack up criminal charges, including for domestic-violence assault, before he raped Kay’s client.

Lay had been on active DOC supervision since 1995. In 1999, he was charged with third-degree rape of a child for raping a 15-year-old girl in the back seat of a car in Montesano, Grays Harbor County; he later pleaded guilty to the lesser charge of third-degree assault with sexual motivation and was classified as a Level 1 sex offender. “Time and time again, DOC looked the other way, failed to seek warrants in a timely manner for his arrest and on countless occasions, not at all, and generally failed to make Lay’s supervision look like anything other than a joke,” Kays wrote in the lawsuit. Citing DOC records, Kays quoted a DOC officer, who in 2002 wrote: “Lay is a man with no remorse, who blames his many victims, and smokes crack cocaine on supervision.” In 2006, a year before the rape, a DOC community-corrections officer noted, “Mr. Lay’s behavior demonstrates his attitude to the rule of law and his requirements to register [as a sex offender]: he could not care less.”

The client was walking near Second Avenue and Pike Street when an old white Cadillac pulled up beside her on March 14, 2007. A man — Jonnie Lay — got out and pulled her into the backseat. The Cadillac’s driver dropped them off in a wooded area, where Lay pinned her to the ground and raped her, threatening to stab her with a screwdriver if she continued to fight him. She later told police her rapist made derogatory comments about women and told her, “If she was going to be out walking around, she should expect this type of treatment,” the charges say. After calling the Cadillac’s driver to come pick him up, Lay raped her again in the vehicle’s backseat. During the assault, Lay dropped his ID card and she read his name. Lay threatened to kill her if she told anyone about the rapes, telling her it would be easy to find her because he knew she was homeless and living at a shelter. She nevertheless reported the rape and provided the responding police officer with a suspect description and Lay’s name, and she agreed to go to Harborview Medical Center, where she underwent an hours-long sexual-assault examination during which her body was photographed and swabbed for DNA evidence. The forensic evidence was packaged in what is commonly known as a “rape kit.” On the drive to the hospital, the officer said her case wouldn’t go anywhere because she was a homeless drug user, according to her lawsuit.

When a detective phoned her a few days later to schedule a follow-up interview, he assured her that her rape kit would be tested. But he never submitted it to the State Patrol Crime Lab for testing. The lawsuit alleges the detective did “the bare minimum” to follow up with the victim, leaving her a voice message and sending her a letter, neither of which she received. A few weeks later, the detective marked the rape case as inactive, the lawsuit says.

Given Lay’s lengthy criminal history that predated this rape, his DNA profile was already in the Combined DNA Index System (CODIS), a law enforcement DNA database operated by the FBI. Had the victim’s rape kit been sent to the crime lab for testing, male DNA from victim’s body would have quickly been matched to Lay’s profile in CODIS, the lawsuit says. Instead, she had to live with the fear that her rapist could find and kill her, Kays wrote in the lawsuit. “For over a decade, (the client) felt degraded, dismissed and that the cruel words of the responding officer were true: she did not matter, she was just a homeless rape victim.”

Until legislation went into effect in July 2015, it was up to individual officers or detectives to decide whether to submit a rape kit for testing. Often, the decision to request testing hinged on whether police believed a victim’s account, or considered her credible enough to testify at trial, according to a Seattle Times report in 2016. The Legislature revoked that discretion, requiring every new rape kit be submitted for testing and dedicating funds to test rape kits that had sat untouched in police evidence storage facilities, sometimes for decades.

As of November, there were 5,096 of the 10,311 previously untested rape kits found across the state had been submitted for DNA analysis: Of the 1,959 DNA profiles entered into CODIS from the newly tested kits, 869 of them — or just over 45% — resulted in CODIS “hits” to known offender DNA, according to information provided by the state Attorney General’s Office. It is unknown how many of the CODIS hits have led to criminal charges. Charging documents filed against Lay blame the delay in testing the rape kit to the statewide rape-kit backlog. But court records also show the state successfully argued a pretrial motion, barring the jury from hearing any evidence about why it took so long for Lay to be criminally charged.

Kays, a former prosecutor, said she’s grateful for the work done by the SPD detective who reopened her client’s rape case but said it’s concerning that police initially may have been biased against her client. “Just because someone is homeless and maybe they struggle with substance abuse issues does not mean they are not as deserving of a rigorous investigation as somebody who lives in a nice home, in a nice neighborhood, and is stone-cold sober,” she said.

Julie Kays and Friedman | Rubin thank reporter Sara Jean Green at the Seattle Times for her thoughtful article on our client’s case, which provided content for this blog post.