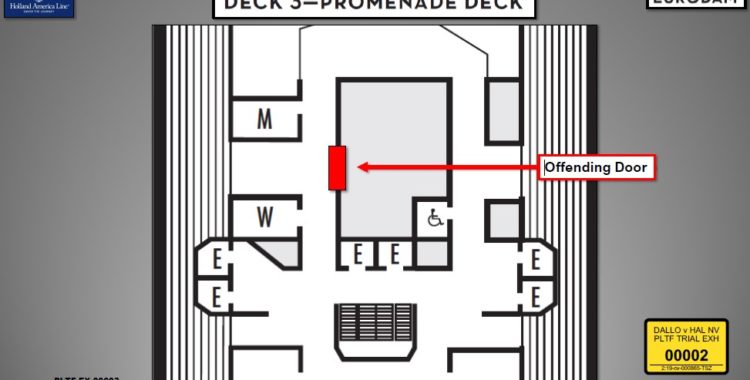 Seattle, WA
In what may be the first Federal civil jury trial to be conducted entirely online via Zoom, a remote jury in the Western District of Washington returned a verdict of $1,351,200 for a San Diego woman who was injured on a Holland America Lines cruise ship in 2018.

84-year-old Margaret Dallo was nearing the end of her 17-day round-trip cruise to Hawaii from San Diego when a terrible event occurred on November 26, 2018. As she was walking down a hallway a crew member suddenly opened a door knocking her down and causing her head to strike a wall. She developed a brain bleed, known as a bilateral subdural hematoma. Following a craniotomy to evacuate blood from within her skull, her friends and family noticed a sudden and dramatic decrease in her mental functioning and emotional changes that have persisted.

The trial of this simple personal injury case was unique. Because of the Covid-19 pandemic, US District Court Judge Thomas Zilly ordered that the entire trial be conducted via Zoom. The Court’s detailed Order for Remote / Virtual Civil Jury Trial insured a fair and efficient presentation of evidence and deliberations by jurors. Each juror participated from their homes, as did witnesses from throughout the country. The trial began on September 29th, and closing arguments were October 5th. After a day and a half of secret deliberations with each other via Zoom, the jury returned a unanimous public verdict in favor of Mrs. Dallo.

Ken Friedman and David Roosa of Friedman Rubin PLLP represented Mrs. Dallo. Commenting on the proceedings, Ken Friedman commended Judge Zilly and the court staff for their thoughtful preparation for a virtual trial. “They thought of everything,” Friedman said. “The jury was also terrific. They were quickly able to learn the special Zoom program used by the Court and to focus on the evidence.” Friedman noted that there were some minor problems with a virtual trial, “like jurors losing connection and not having an opportunity to meet or talk to other jurors prior to deliberations,” but he feels that the experience was on balance an overwhelming success, regardless of the verdict. “Winning is also a plus,” he added. Commenting on the verdict, attorney David Roosa said, “the Dallo family suffered a serious loss when Margaret was injured. The verdict can’t make her healthy or whole again, but it is a measure of justice and recognition by the jury that she deserved compensation.”