Friedman | Rubin has joined with Littlepage Booth, Power Rogers and Smith, and Brodkowitz Law, to bring suit against the Boeing Company exposing a “dirty little secret” in the commercial airline industry: cabin air breathed by passengers and flight crew can become contaminated with toxic by-products from jet engine oil. Since 1954, Boeing, the leading manufacturer of commercial airplanes, has used a “bleed air system” for cabin air on the vast majority of its planes. This means that the air breathed by passengers and the flight crew comes from the outside, then through the heated jet engines and into the cabin. If the jet engine leaks oil (for one of a number of reasons), the toxic by-products of that oil get into the cabin air system. Known as “fume events,” studies estimate that one such air contamination event occurs every day.

Announcement of the lawsuit was featured on national news shows on June 23, 2015 (Click link to watch):

Fume events can be very dangerous to the health of passengers and crew members, causing both short and long-term injuries.

Air from the outside environment is pulled into the plane through the jet engines. This “bleed air system” permits contaminated engine oil by-products to enter the cabin air. 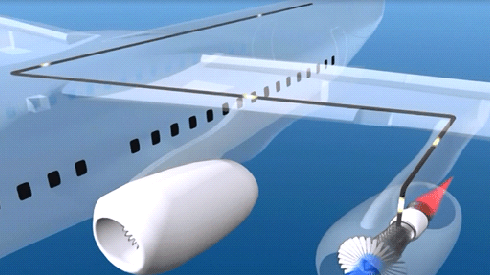 Over the past several decades, Boeing was put on notice – at least 40 times – that contaminated bleed air was a serious health hazard and safety measures were sorely needed. As Boeing documents confirm, the aircraft manufacturer knew fume events were occurring and causing toxic air to enter the cabin. Boeing also knew contaminated air could cause serious health problems for flight crew and passengers. Yet, despite this knowledge, Boeing never designed, installed or retrofitted its aircrafts with either alarms or sensors so the flight crew could receive immediate warnings of a fume event and take counter-measures (such as stopping air coming into the cabin from the affected engine); or put into the cabin air system appropriate filters to remove oil by-products. Boeing documents routinely discuss the need for such sensors, alarms or filters but upper management showed little interest in actually providing solutions to this safety problem. As one Boeing engineer noted, it was probably going to take “a tombstone before anyone with any horsepower is going to take interest.” (Ex. 1).

In 2005, at an International Aero Industry Conference, a team of experts from various fields (including executives for the British Airline Pilots Union, physicians, researchers and lawyers), focused on a safety issue that “has been under the radar in this industry for a number of years: the problem of oil leaks in aircraft.” (Ex. 2). The panel concluded that contaminated cabin air was causing a danger for passengers and “a workplace problem resulting in chronic and acute illness amongst flight crew” resulting in “significant flight safety issues.” The panel “urgently call upon Government, Industry and Regulators to work in partnership with cabin environment medical and analyst specialists and representatives from flight crew unions to analyze, quantify and remedy the cabin air quality problems” identified. (Ex. 3).

The newly filed lawsuit, Woods et al v. Boeing, is venued in Chicago where Boeing has its headquarters. The suit was brought on behalf of four flight attendants who, on July 12, 2013, suffered debilitating injuries from a “fume event” on board a Boeing 737 aircraft. These women ask that Boeing take responsibility for its actions and implement safety measures to protect future passengers and flight crew from such injuries. In this and other cases under investigation, Friedman | Rubin and the litigation group represent people injured by toxic cabin air. These clients developed aerotoxic syndrome after exposure to contaminated cabin air, including short and long term injuries and cognitive impairment. Reported toxic cabin air injuries include: nausea, vomiting, rashes, dizziness, shortness of breath, loss of consciousness, headaches, blurred vision, gastrointestinal difficulties, decreased motor skills, numbness and tingling in arms, hands and feet, joint and muscle pain, tremors, balance problems and residual cognitive impairment such as memory loss, trouble concentrating and difficulty with reading or writing. (Ex. 4).

If you or a loved one developed injuries following a flight where you believe the cabin air was contaminated, please contact Friedman | Rubin at 206-501-4446 or email info@friedmanrubin.com.