A Jefferson County jury awarded just under $3.1 Million today to Friedman | Rubin’s client, a Conifer, Colorado man injured in an August 24, 2008, rear-end collision. Scott Martin, the married father of five, was stopped on Highway 285 waiting for traffic to clear to make a lawful left turn when a vehicle struck him from behind. It was undisputed that the other vehicle was traveling an estimated 60 miles per hour and that the other driver’s negligence caused the accident.

Martin suffered what was characterized as a “mild” brain injury, but among other deficits, he was no longer able to handle work dispatching trucking cargoes as he had in the past. His attorneys, Rick Friedman of Bremerton, Washington, and Richard Kaudy of Denver, tried the case after failing to resolve the case with Allstate Insurance Company, which insured the other driver. The issues decided by the jury were the seriousness of Scott Martin’s brain injury and the amount of damages needed to compensate him.

The multi-million dollar award is one of the biggest personal injury verdicts ever recorded in Jefferson County, Colorado. The attorneys expressed gratitude for the jury’s award. “This verdict vindicates Jefferson County values of thrift, hard work and family values,” Kaudy said, adding that “the jury worked hard to protect this working family from suffering undeserved economic hardship.” According to judicial observer James Chalat, the verdict stands as the largest personal injury verdict in Jefferson County.

The Martin family, some of whom are shown in this pre-injury photo with Scott Martin (Trial Exhibit 21), are very thankful. 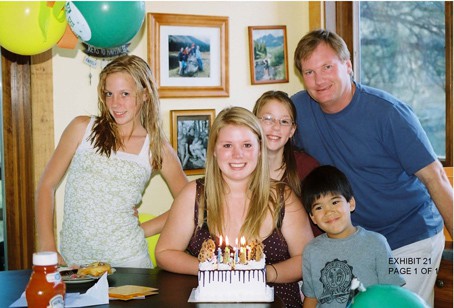