For the second time in a four month period, a Friedman Rubin trial team led by Rick Friedman, Henry Jones, and Sean Gamble, has won a multimillion dollar bellwether verdict against the corporate successors to Monsanto.  Previously, on July 27, 2021 a King County jury returned a $185 Million verdict in the case of Erickson et al. v. Monsanto.  Monsanto has appealed that verdict.

On Wednesday, November 10, 2021, another King County jury returned a verdict for $62 Million for a second group of plaintiffs in the case of Long et al. v. Monsanto. The Long plaintiffs included four students, two parents and another adult who alleged they were poisoned by PCBs at Sky Valley Education Center in Monroe, Washington between 2011 and 2016. They were the second group of plaintiffs to reach trial and were actually handpicked by Monsanto from a group of over 200 teachers, students and parents who alleged brain injuries from exposure to leaking PCB ballasts in fluorescent light fixtures at the school. 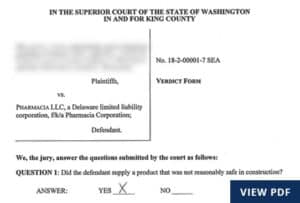 In the second trial that concluded Wednesday, the jury again found that PCBs were not reasonably safe in construction or design and that they proximately caused injury to the plaintiffs. The jury awarded compensatory damages to students ranging from $5 to 8 Million, and injured adults received awards ranging from $600,000 to $1.5 Million. These plaintiffs were also awarded $5 Million each in punitive damages under Missouri law since that is where Monsanto’s headquarters was located and where its decisions were made.

While Monsanto blamed the Monroe School District for failing to remediate PCB light fixtures, the evidence reflected that Monsanto sought to downplay health effects from PCBs, going so far as to use fraudulent scientific studies to deflect blame. Monsanto was also sanctioned $1 Million during the litigation for hiding relevant documents. According to trial team leader, Rick Friedman, “Monsanto’s 80 year history of disseminating misinformation about PCBs is finally catching up with it. Monsanto has steadfastly refused to take any responsibility for the mess its PCBs have made. For decades, PCBs were, in the words of one Monsanto memo, one of Monsanto’s “most profitable” products. Billions have been spent by taxpayers trying to clean up Monsanto’s mess. Untold numbers of people have been hurt. If Monsanto will not clean up its mess or even warn people of the danger, then we will have to keep holding it accountable for the injuries it causes.”